Comeynist; any member of the Comey-Clinton Corrution Club, especially Trump hating dems; a mickey mouse drama queen team of people who still cant get over the loss

Comeynist; any ex communist turned, fbi man who is unable to characterize a personal, political view, claims to be non- partisan, but is still affiliated with so many left-wing organizations it’s as if he becomes, born again, brought right back to where he began in the first place, as a communist

Comeynist; one in power who begins to fall in love with their own virtue

is exposed, busted then swiftly fired

'Of all political positions, why does James Comey say he literally "doesn't know" what his own political opinions are? In December 2003, Comey admitted that he had been a communist in his twenties, but voted for Reagan in 1984. “I voted for Reagan—I’d moved from Communist to whatever I am now. I’m not even sure how to characterize myself politically. Maybe at some point, I’ll have to figure it out.”

Of all the political/deep-state "allies," why is James Comey so staunchly defended (on CNN, especially) by former Obama CIA Director John Brennan -- who, like Comey in his "youth," had been a communist sympathizer too? Brennan voted for Communist Party nominee Gus Hall in 1976. Now, Brennan is most likely a Mohammedan. Lest we forget, Brennan is also a proven liar who used the CIA to spy on the Senate. Birds of a feather flock togethe

Things are looking up!! 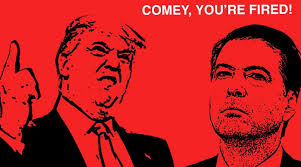