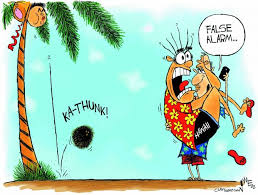 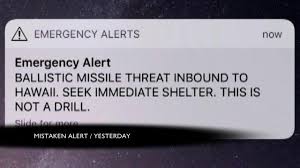 Under Seeds; "Under the Influence of Seeds" a staranoia-stevia-seagalia(star stoned paranoia) episode caused by the most potent strain of Hawaiin sensimalia hybrid Kush seed there is; kush, Ak57, Green Beret-b-banner, Missle Launcher, so extreme it's like a metamorphosis of, Bruce Bannercannoid turns into,  'Steven Seagal' avenger star

Effect: a psychospasmatic, Sudden Impact reaction, and feeling of being Above the Law,  a desire to cause an uneccessary massive fall out, (ie, fall out over hawaiis false missle alert)

starts from someone etremely stoned, cranked, 'under seed' while watching the film, “Under-Seige” several times a day for several days during an AMC Steven Segal movie marathon, Plus the fact that NK’s Nuclear Program wargames is having the desired effect of scaring the absolute crap out of some already wacked out Americans, add to that a variety of anti-depressants mixed with alcohol so  he just flips, warning, and convincing friends that theyre really ‘under siege’, spreading panic, mass hysteria by telling of an impending missle already launched and directed to hit Hawaii in about 20 min, explaining how it could incinerate one million people in a half a second which causes families to hide underground in sewers and charter boats to deserted islands

Under Seeds; to be completely wacked to a mind altered paranoia state

Under Seeds; name of the most potent mindboggling psycotropic strain known to mankind in HAwaii

Billy and Skooter at the control panels in Hawaii while watching the last quarter of Under-Seige, the penta'gone' scene…

Billy(B); You thinkin what Im thinkin?

Skooter(Sk); Ya, billy we better find a place to hide, and warn people cause that missle is headed right die-rected to hit us big here in Hawaii.

Sk; Look whose talkin Holdie Gone!! Youre holdin it in your left hand and you don’t even know youre, William 'Holden' it!, Until its gone!. Now da doob’s  fires out!!

Sk Billy did you already send out the, Ballistic Missle Alert that we are'Under Siege' ??

Yep but, I cant move i cant hide i cant even see