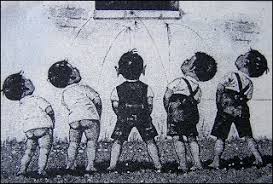 pissinbrata; perpetual, political pissing contest, especially between members on the same team, a waste of time and money

Two-party bickering between, two faced politicians, on both sides, who act more like spoiled children, following peer pressure to maintain a wealthy image

pissin-brata; phony grandstanding brats who go back and forth opposing and praising, flipping and tripping instead of focusing on trying to work together like mates or brothers to make something better like a good stimulus plan instead of wasting time and money

A pissing contest is any argument that just goes back and forth between two individuals but never gets resolved; a contest or rivalry in which the main concern of the parties involved is the conspicuous demonstration of superiority.

ya, hes the first non politician in history to only, forever beholdin his own peace while going #1, a pissing contest against nobody but himself except for maybe with his son in fun..

bipartisan; relating to, or supported by two groups, especially by two political parties