contretrumps; any unexpected, dispute, unfortunate hitch or event that is swiftly diffused or trumped

contretrumps; tiger toothed retaliation, a master counterpunch secret weapon, whereby the one who can ‘speak from the heart’, turns the disaster or any hardship, ‘dole’ into many more ‘dolors’, of pain, striking an even harder, ‘contrecoup’ brain bruising punch, thrown right back into the face of the aggressor

A ‘tiger's tooth’ believed to have mystical powers. The teeth were used to help someone gather courage and even cause fear among those around them. There was the belief in Africa that if one traveled with a tiger's teeth in their pocket they'd have more power or fortune in their journey

1.(pathology) A bruising of the brain caused by a blow, appearing on the opposite side to that on which the blow was struck.

If Cruz ended the contretemps technically ahead in the abstract realm of argumentation, he was decidedly less so in the realm of the human and intuition. Speaking from the heart doesn’t appear to come naturally to Cruz the way it does to Trump, even if it makes Cruz less susceptible to gaffes played off as bombast.

Thats it!! Have you seen the news? I think Trumps history this time.

You know how many times ive heard about all the contretemps that everyone says will take him down??!! Just wait a minute for the contretrump!! 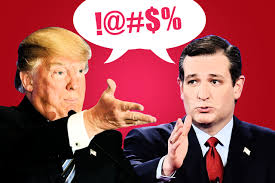