holdie gawn verb or noun; 'reefering' to the etiquette of passing a joint to one another; to hold on to a joint for too long, forgetting that you're holding it, until the joint's fire has burned out, or is 'gawn' thus wasting the smoke (gone; e.g 'going going..... gawn!"... usually indicating how potent the, 'gold' is(very high THC in the pot) because the person smoking it forgets they're holding it.

holdie gawn v; to inhale and hold in the smoke without exhaling for as long as possible in order to get the maximum effect, to get, ripped, wasted or gawn(gone) which can cause one to forget passing it on

holdie gawn; a 'laugh in'; to ignite a laughing frenzy because of how gawn everyone is

At least when one bogarts a joint, they're not wasting the smoke, but theyre kinda stealing extra hits

A 'holdie gawn' can also mean that the golden pot of stash that you were holding, was just 'here' (hawn) but now all of a sudden, is depleted and or completely, gawn(gone)

holdie; someone who holds onto something, a lot

gawn; box, bucket, tub or cask full of something valuable like jewels or alcapulco 'gold'

Dude where did all your friends go?

Holdie Gawn bro!!! they only came to toke n go!!

Well!!?? whats your excuse holdie gawn!!??? give me back that dead joint and my lighter... You lost a turn because you lost the burn, and that aint no joke because you also wasted valuable smoke!!!

Ya, so that makes me a wasted bloke!!!

Goldie Hawn; Goldie(gold, as in 'pot', of gold) hawn means, 'here' in Maltese 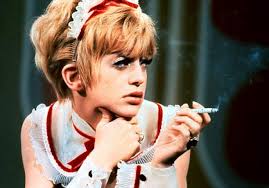 Goldie Hawn; American actress, famous for staring in many Hollywoood films, including the hit tv show 'Laugh In' and for having a very long and open relationaship with actor Kurt Russel