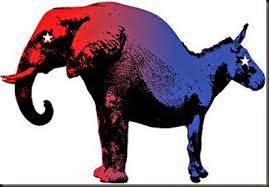 Jaleftant v; a desperate, distressed, ‘Jackass’ to ‘elephant’ conversion or ‘red eft left’ to the winning side

Any Democrat, ‘JA’ jackass who rallies to destroy and berate the opposition party’s candidate throughout an entire race but gets ‘eft’ losing the race, and then suddenly, conveniently claiming to have 'left the left' to be a true Republican, “elephant”,  is really just a bigger jackass; a red eft newt, or an insigmificant little red ant until they prove worthy

jale; they, plural of JA; jackasses(democrats)

eft; after, euphemism for getting f'd

Mr Tight(Texan RIGHT); Hey mr dupnit, (nitwit duping pundit), I thought you said you would leave the country if Trump won, so now youre all of a sudden a Republican!!??

Mr. Cleft(California LEFT!) Ja!! (yes) I changed to Republican, im an elephant now, Im even moving to texas to get rich

Mr. Tight; Well hold on there, its not that easy, since you conveniently changed ‘after’ the race was over that would make you just a, ‘jaleftant’, an even bigger dumbass, eft donky, jackass, not an elephant yet, just a red eft slimey newt, at best an insignificant little red ant until you earn it!!! Now git!!,go out, get a job, n work! you wanta be Newt-get rich lazy jerk!!